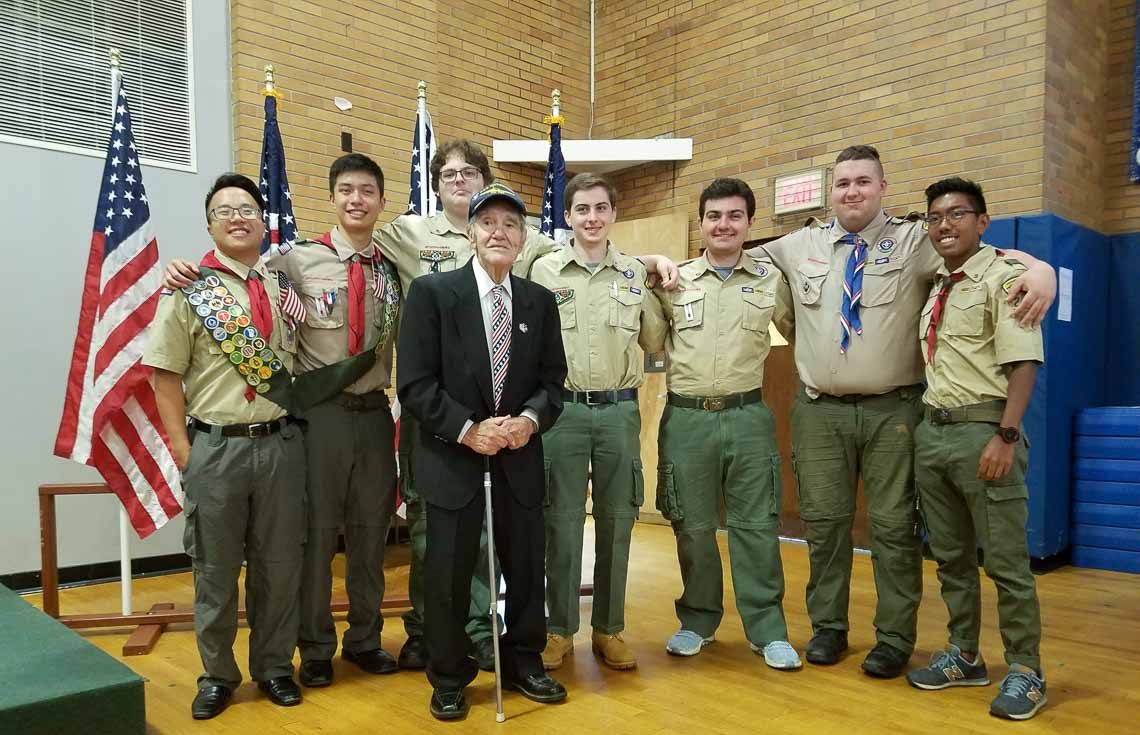 Gus Scutari represents the best that Syosset has to offer. He is simply a local treasure.
Actually, Gus is a national treasure too, but for the moment we will keep things local.
Every Memorial Day the Syosset branches of the American Legion and the Veterans of
Foreign Wars (VFW) organize the annual Memorial Day parade up Jackson Avenue into
the center of Syosset. There is a small memorial park on the northwest corner of where
the LIRR tracks cross Jackson Avenue, with a memorial to those soldiers from Syosset
that have been lost in the wars our country fought in. Fittingly, the parade always ends

with a dedication at that memorial, featuring a rifle salute and a bugler blowing “taps.”

As much a fixture as the memorial statue, there is always Gus Scutari delivering his
speech and presentation. Gus has been active for decades in both the American Legion
and VFW and obviously is deeply dedicated to memorializing those who were lost. If
you have never heard Gus speak, it is reminiscent of the late much-loved baseball great
Yogi Berra; Both share a unique way of putting thoughts together that somehow always
seem flippant, yet always come off as quite meaningful …. almost despite himself.

Gus is also a fixture in the Boy Scouts and Cub Scouts in Syosset, and is always invited

and attends all ceremonies honoring every new Eagle Scout. Gus never misses a
ceremony and always has the same apparently flippant, yet deeply meaningful, way of
speaking. The one thing that Gus always reminds the boys of is how high a calling
patriotism to the country remains to this day.

History remembers Gus as a member of “The Greatest Generation,” a well-deserved

term in his case. Gus is proud of his service in the Navy, spending much of the Second
World War in the Pacific on a tin can (the loving insult that sailors use to refer to
destroyers; in this case USS Haynesworth DD-700). Gus was a fire controlman 1st
class (somehow the Navy decided that fire control refers to firing the big guns, and
putting out actual fires is called damage control), whose job was to aim and fire the 5
inch cannons on the ship, used for shore bombardment before the Marines were sent
in, and for antiaircraft suppressive fire. The ship has an illustrious combat history, being
present at most of the famous actions of the Pacific theater in 1944 – 45, and once was
hit by a “Kamikaze” suicide plane.

Yes, Gus is a national treasure, but in Syosset, he is ours. We are honored and

privileged to have him.

Ed Gellender is a member of the local Theodore Roosevelt Council. He has been active in Boy Scouting in Syosset for 25 years. While serving as Assistant Scoutmaster for Troop 423 in Plainview, he is also the Unit Commissioner for all Cub and Boy Scouts who meet in Syosset. Ed helped to establish Troop 205 in Syosset about 10 years ago, which at the time of this writing has already turned out more than 10 Eagles.

Editor’s Note: The images here of Gus with Eagle Scouts and of Ed Gellender and Brian Zaino were taken after this article was originally published, and added to this article when we ported our archives over to our new website in 2021.