Sometimes, social media is terrible. There are certain people, though, who make it wonderful. We have been fans of Kim Skillen since we met her back in 2012 as part of an intrepid tribe, the “Friends of Long Island,” who rose up in the wake of Superstorm Sandy to help their neighbors across the South Shore. Soon after we “friended” her, we started seeing posts about her artistically talented, delightfully, uniquely-herself daughter, Mackenzie. Kim’s mother, Judy is wonderful, too, but that’s another story.

Over the years we have watched Mackenzie assist her mom in all manner of helpfulness, gradually becoming a force for kindness all her own. We have witnessed her drag enormous bags of peanut butter and jelly sandwiches into New York City to feed the homeless folks she passed. She’s also done quite a bit to gather supplies for those in need at home. We’ve watched mother and daughter travel to Puerto Rice to help out in the aftermath of Hurricane Maria. We’ve seen them work together to beautify their own  West Babylon Community, and do other many things we can hardly count here. We witnessed Mackenzie be inducted into the Town of Babylon Youth Court and win a much deserved “Eagle Award” for compassion, and a Leadership Award at her West Babylon High School. She is generally revealed to be a great, fun friend.

Last May, Mackenzie began preparing for a second voyage to Haiti to work with orphans there as part of a project called Open Door Haiti. This is what we read:

“Everyone this is Mackenzie! I have taken over my mom’s Facebook page to talk to you about the Bracelet Project for Haiti! I NEED YOUR HELP! We will be going to Haiti in the end of June to work with Open Door Haiti. My favorite part of the trip is working with the orphans. Last year we made over 125 bracelets that I handed out to the orphans and children in the community to let them know we care. I would like to bring even more bracelets to Haiti this summer. The look on the children’s faces when they got a gift was unforgettable!”

“This is what I need from you… make a homemade bracelet, take your picture, write a note (Creole or English) and put it all in a zip lock bag (see the pics below). I will hand out the bracelets to all the kids I see and try to take as many pics as I can so you can see the child who got your bracelet. I feel this project is important because it gives kids here a connection to kids in Haiti. It also gives the kids in Haiti a present and picture of someone who cares about them. I am willing to come talk to anyone who is interested and wants to learn more about Open Door Haiti and the Bracelet Project..”

When asked if there were other ways to help, Mackenzie created an Amazon wish list of things she knew the orphans would love, including shoes, art supplies, jump ropes, and hair clips for the girls. She invited people to send things they thought would be useful. She noted that she would love to make sure all the orphans have new shoes.

“I wish I took a picture of Mackenzie’s face when we got home and found the first delivery from Amazon,” said Kim, “She was so excited to see that people took the time to help her efforts!!

Bracelets began to be made all over town. More items from Mackenzie’s Haiti Amazon Wish List arrived. Teachers opened their classrooms to Mackenzie to speak

“I must admit it was pretty fun to watch Mackenzie as she spent time with the students!!” wrote Kim, as they offered grateful thanks. 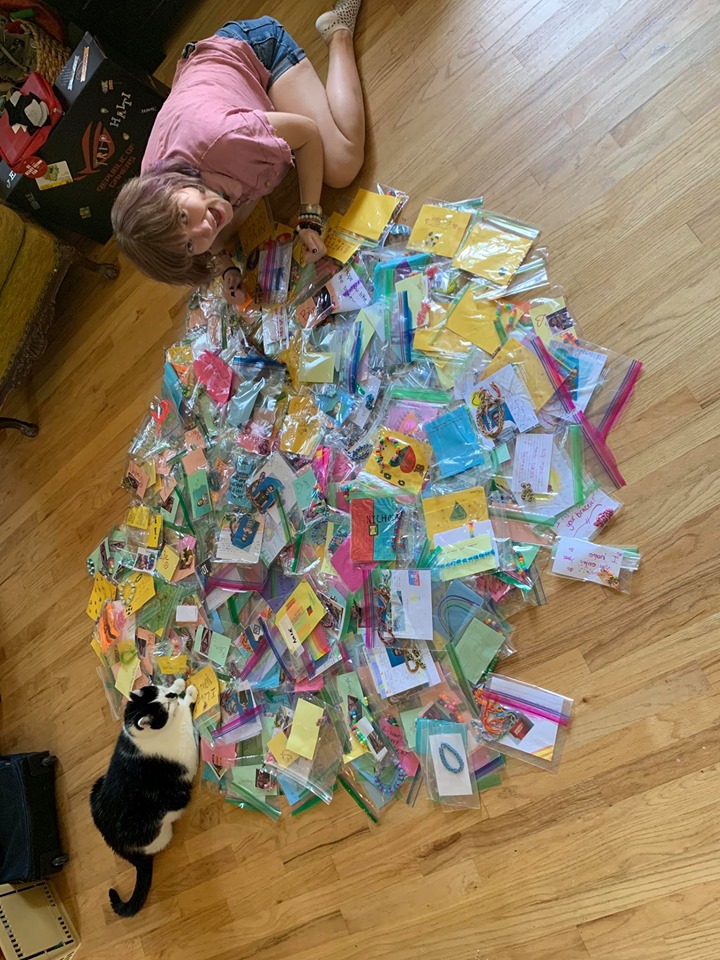 She ultimately collected 408 Bracelets, complete with notes and friendly pictures of the children who sent their love. People from ages 4-80 participated, including friends, Sunday school kids, Girl Scouts, elementary and middle school classes. The bracelets nearly filled her entire carry on. Her suitcase was packed with crocs, soccer balls, art supplies, hair accessories and school supplies.

It was enough to make sure every orphan she worked with would get a new pair of shoes. Reporting on a what she had just heard from her daughter, Kim said Mackenzie told her that “she designed and painted a mural at the orphanage today and is feverishly handing out bracelets. She was excited because she saw a girl playing and realized the shoes on her feet were a pair of crocs she brought down!!”

Says Mackenzie, “I am overwhelmed by everyone’s generosity and support.”

We are overwhelmed by her. Awesome.