Ron Stein is sharply intelligent and deeply passionate. He loves film, music, tennis, hiking, and getting his hands straight into the dirt. He is also a Long Island pioneer who dedicates incredible resources to causes that resonate with him. These have included strong advocacy for those impacted by fraud, pioneering Smart Growth land use philosophy on Long Island and, most recently, a tremendous effort to advance the legacies of John and Alice Coltrane. Above all, Ron is a devoted husband, a great friend, and a proud father of two young men. While his sons are each very much their own individuals, they do seem to have that same spark in their eyes…

More than a Career

Ron is a Certified Financial Planner who was among the first proponents of the socially and environmentally responsible investing movement. Since 1987, he has been a member of the Social Investment Forum trade association. Throughout the early and middle ‘90s, he was a frequent lecturer and workshop leader on Personal Finance, Social and Environmentally Responsible Investing, and various environmental topics. He served on many panels, and spoke at several Long Island and New York radio and television events.

To this day, Ron continues to weave principals of sound financial planning together with enabling people to align their investments with their values. His business, Good Harvest Financial Group, is now 25 years old. When the US economy finally fully hit the wall in 2008, Ron devoted tremendous energy to helping people understand what was happening and where they could find help. He founded an organization specifically dedicated to helping victims of Bernie Madoff’s Ponzi scheme. He then went on to launch the Network for Investor Action  and Protection, an investors’ advocacy not-for-profit group of over 1200 members nationwide. Their purpose is to advance protections for investors as well as victims of fraud. We weren’t entirely surprised the morning we awoke to hear Ron’s voice on NPR, talking about his understanding of needed regulatory reform. He shared some of these views directly with Congress in 2012.

A Man with a Vision

We first met Ron in the late 90’s when he was launching a very different organization: Vision Huntington. He had some experience as an environmentalist who had primarily gotten involved with national organizations like the Sierra Club. Locally, he had spoken out against the Shoreham nuclear plant and had also helped bring some good models to light when the region was figuring out how to preserve its Pine Barrens. Ron came to our attention when he joined Long Island’s first and still only community leadership organization, Leadership Huntington.

You see, Ron’s attention had now been turned right to his own back yard. Frustrated by land development that seemed to occur without concern for the environment or the community, he had recently joined with a local architect to convene a variety of stakeholders to introduce a then-revolutionary concept called “Smart Growth.”  The emphasis was on broad stakeholder participation, new approaches to housing, open space preservation, traffic and pedestrian safety, and the creation of walkable, attractive communities.

Ever willing to go straight to whomever he feels will help advance a cause, Ron surveyed community members extensively. This included getting roughly 900 of them to fill out a 5-page quantitative and qualitative survey at the local Fall Festival. He also organized local leaders to visit model communities, and brought in top-of-their field speakers from across the nation to talk about cutting-edge land use practices. He worked with the Town to establish a Smart Growth Steering Committee that brought together local government department heads and other representatives of diverse interests who may never have otherwise connected. Together with a growing coalition of public, private, and not-for-profit interests, he championed Long Island’s first true community planning process. Reflecting his dogged determination to sharply raise the bar, he became known around Huntington Town Hall as “The Man Who Wouldn’t Take ‘Yes’ For an Answer.”

It…together with supportive, complimentary and sometimes tempering efforts alongside him…worked. A matrix of ambitions some called a “Tablet of Intimidation” and others just called “pipe dreams” was largely realized within five years. Fundamental change was happening. Of course, it must be emphasized that none of this occurred without tremendous teamwork. While perspectives differed, Ron was far from alone in yearning for a better way to build. The organization was deeply blessed with smart, conscientious, pragmatic, hard-working people, many of whom continue to directly serve its mission to this day. The broad coalition of program partners and supporters of the organization constitute a great wave of positive momentum. Still, the more experienced we have become, the more we realize how Ron’s skills at facilitation and communication at the very beginning of this movement made an extraordinary difference. He made sure people knew what was going on, why things were proceeding the way they were and, even more importantly, that everyone around the table was heard and understood. He did this always with humor, humility, and genuine interest.

The fruits of Ron’s labor soon took on a life of their own. While the Town of Huntington readily embraced the general principles of Smart Growth it also, at first, demurred somewhat from challenging its own status quo. The Town of Brookhaven, on the other hand, declared that it was ready for significant change. Vision Huntington quickly grew to become Vision Long Island, which you can find sharing excellent information on Facebook, here and on YouTube, here.

It’s bittersweet to watch a beloved child grow into adulthood. While things didn’t always go exactly as Ron envisioned, we have always been impressed with the grace with which he allowed the organization to assert its independence and come into its own. Over the last 20 years, Vision Long Island has grown to play a tremendous role in community-based planning, in influencing policy decisions, and in facilitating active cooperation across interests and perspectives.

In addition to specific project work, the organization brings an extraordinary number and diversity of stakeholders together for the highly informative annual Smart Growth Summit. It meaningfully celebrates people, projects and policies that are making a positive impact through the annual Smart Growth Awards. All in all, in a world where one can sometimes wonder if different perspectives can ever really reach across the table, have productive dialogue and actually work together, those involved with Vision Long Island have established that the answer is “Yes.” Our communities are better for it.  We are grateful.

Ron knows a lot about economics and finance. He cares very deeply about the environment. He loves Long Island’s communities. Beyond what we’ve mentioned, he has been active with numerous non-profit organizations and environmental initiatives. This includes a great passion for the arts and for history…especially Jazz.

When Ron learned that the home in which John Coltrane wrote his masterpiece, “A Love Supreme” was in Dix Hills and due for demolition, he quickly got on board to help however he could. He is now President of the Board of an organization called The Coltrane Home in Dix Hills. Together with the Coltrane family, local historians and diverse artistic devotees they have saved the house where this legend raised a family and spent his final years.  Now, they are working to restore and adaptively reuse it.

The vision for the Coltrane Home in Dix Hills includes the creation of a museum and cultural center that reflects the life, the music, and the spiritual and humanitarian legacies of both John and Alice Coltrane. The historic restoration of the home will include a selection of original furnishings and instruments, an extensive digital archive with listening stations, a meditation garden dedicated to Alice Coltrane, and archival materials donated by Coltrane scholars and collectors.

The importance of both John and Alice Coltrane have a lot to do with incredible music. Through, above and beyond that was a tremendous desire to use their talents and influence as a force for good. As such, a big component of this project involves education. Pilot programs have already begun offsite and will continue at the Home when it opens to the public. As stated on the website www.thecoltranehome.org, they are focused on outreach to the community that will:

Those interested in learning more can check out this material that offers an in-depth explanation of “The Coltrane Legacy Education Project.”

A Journey Integral to the Mission

One thing we have long appreciated about Ron is how the things he is involved with tend to have a journey that’s as meaningful as the ultimate goal. This starts with the people he joins forces with whom tend, by and large, to be extraordinary lights. Together, they provide a depth of experience that seems to pervade every step of the journey. While the house is not yet opened, it’s safe to say an awful lot has already occurred to advance the Coltranes’ legacies.

Our first encounter with the organization was an intimate gathering of jazz greats at the En Japanese Brasserie on Hudson Avenue in NYC. Among the hosts was Yasuhiro Fujioka (“Fuji”) who is, among many things, one of the world’s most important collectors of Coltrane memorabilia. The event also included involved jazz greats, community leaders, aficionados, and others. Speakers included Cornel West and Carlos Santana, who is the honorary chairman of the The Coltrane Home in Dix Hills’ Board, as well as Ron and Steve Fulgoni, the Town of Huntington resident who first realized what the house was and how important it was to save. John and Alice’s son, Board Chairman, Ravi Coltrane played with his quartet. Elvis Costello donated a guitar that he signed on site. The power of the music was matched by the passion of voices who had been touched by the musician and who recognized the potential great music has to lift the human spirit. You can Check out images from that powerful day here. On the organization website, you can find a really beautiful video made that day by many of the incredible artists and supporters in attendance. 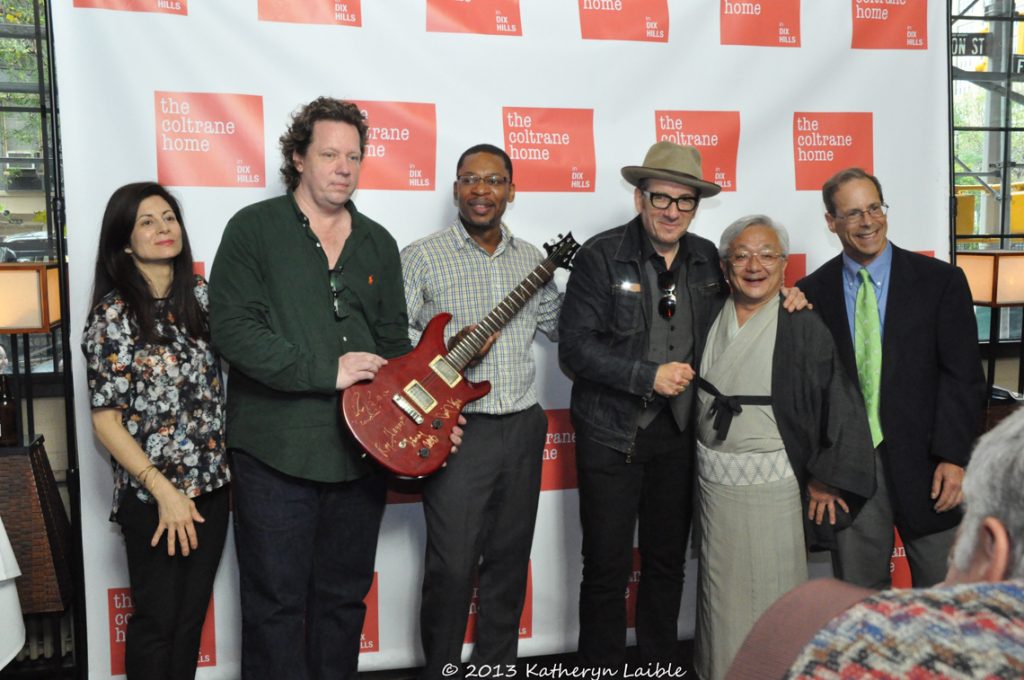 Soon after, the first annual Coltrane Day was held at Heckscher Park in Huntington. This event represents an extraordinary fusion of professional and enthusiast, master and student, style and substance. There are workshops, artist booths and great food. A broad variety of musical genres and other art forms have been included, ranging from gospel to funk to electronica and, of course, a whole lot of jazz. You can check out images from the first Coltrane Day here and from the 2016 event here. Learn about the upcoming 2017 Coltrane Day, to be held of July 22nd, here.

The most recent event we attended was a sold out special showing of the critically acclaimed documentary, “Chasing Trane”. It was held at Huntington’s cinematic gemstone, The Cinema Arts Centre. The moving documentary about John Coltrane was followed by a Q&A with the film’s director John Scheinfeld and with renowned bassist Reggie Workman, who was part of the John Coltrane quartet in the early 1960s. There was a lot to appreciate.

John and Alice Coltrane’s lives are inspirational stories that continue to have deep relevance, not just for musicians, but for humanity as a whole. We are grateful to Ron and to everyone else endeavoring to advance their important legacies. We can’t wait for next month to get to experience Coltrane Day again, and look forward to seeing the home become a cultural center of its own.

To learn more about how to support this mission, please check out this page on their website: 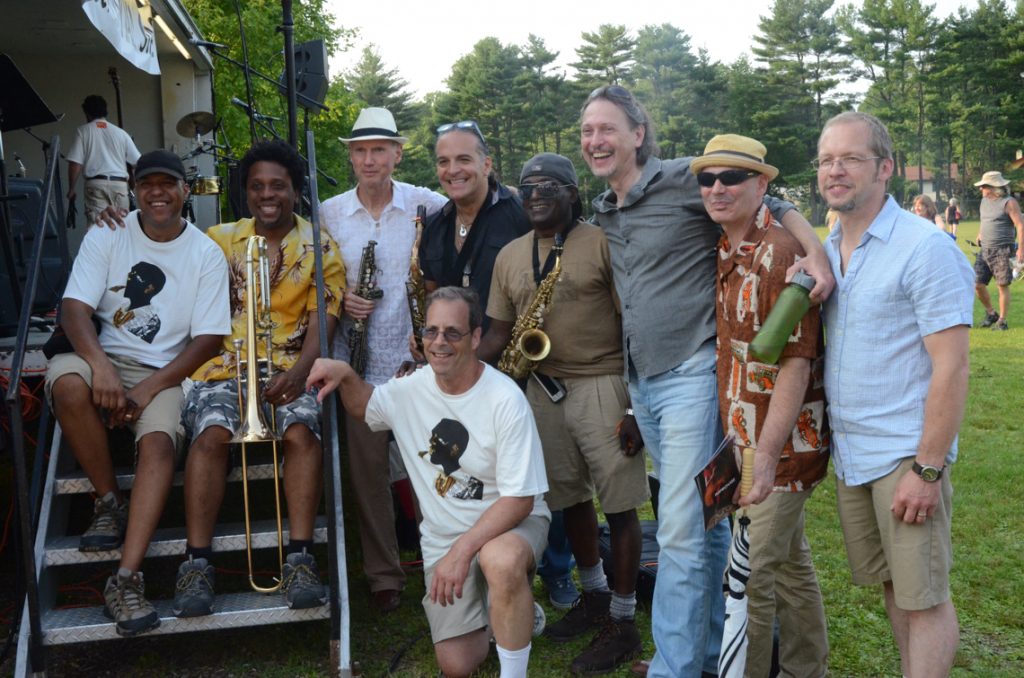 —
2/18/20: We are grateful for continuing interest in this piece. This article has been corrected from the original version. where Steve Fulgoni’s first name was mistakenly stated as John.

This article was also corrected from the original version to specify the restaurant, En Japanese Brasserie, whose ownership was mistakenly listed as that of Yasuhiro “Fuji” Fujikoma.