One glance at the LI Sled Hockey website reveals that – while they do seem to win quite a bit – it’s about a lot more than that. The stated mission is “to foster, promote and encourage sportsmanship, teamwork and camaraderie through the sport of sled hockey, specifically aimed at…physically and/or mentally challenged athletes.”  You don’t have to leave the homepage to get the idea it’s about a lot more than that, too.

Frank has told me this story with a gleam in his eye, “Now, we go back every year!”

You can see the team in action ten years ago in this 2011 YouTube piece by Ryan McEvoy. They’ve been covered by the New York Times, the YES Network and others. I like this piece in the Massapequa Observer, and this one about a visit from Mike Rowe in the LI Herald.

Says the website, “I will go anywhere at any time, at my own expense, to speak about these athletes in an attempt to gain the funds necessary to keep this program alive and flourishing. The athletes of Long Island Sled Hockey, Inc. deserve that chance to compete.”

I get to the skating rink in Bethpage right on time. Kids are making their way in, and Kevin McNeil is waiting to introduce me to Frank Martin.

I shake Frank’s hand, explaining about my newsletter and that Kevin had told me about a lot he was involved in, but that this was what he really wanted me to see. Frank asks where I get my stories. I share a bit of the specific path here and remark that they seem to be everywhere.

Frank agrees, “There are so many people out there, just quietly doing the right thing. Not just the right thing, but amazing things. Right under our noses. I don’t know if a lot of people have any idea the amount of good that’s being done.”

One such gentleman both Frank and Kevin hope Long Island never forgets is Bryan Blomquist, a Vietnam Veteran and retired Lynbrook Lieutenant Police Officer who passed suddenly in June of 2021.

Atop the LI Sled Hockey website is a tribute, “Bryan humbly led the Long Island Rough Riders as President and Coach for 25 years, driving the team to countless victories and personal accomplishments all over the globe.

The coined phrase Bryan often used to describe the Rough Riders, ‘We measure success in smiles, not medals’ is a testimony to the man and leader he was both on and off the ice.”

This memorial ends with confidence that if anyone can take on that mantle it is Frank who has been along for this ride since the beginning. Frank proudly leads the team but has no intention of actually taking anyone’s place, “I’m just carrying on what Bryan created. Bryan was unique to say the least. When he went, the community and world lost a tremendous human being.”

If someone should know, it’s these guys. While I wish I could have met Bryan, I’m pretty sure the team’s in good hands.

Frank agrees, “There are so many people out there, just quietly doing the right thing. Not just the right thing, but amazing things. Right under our noses. I don’t know if a lot of people have any idea the amount of good that’s being done.”

It took a little doing to schedule editing this story. Retirement for Frank has proven to be one of the busiest times of his life. Among major priorities at the moment is preparing for a road trip for the NHL Sled Classic. This is an annual round-robin form tournament for NHL-affiliated sled hockey teams. This year it’s being hosted by the NJ Devils from November 18-21 at the Ice Vault Arena.

The organization was originally called All Island Sports. Then, in 2003, they went in with a whole new board to found LI Sled Hockey. They call their team “The Rough Riders” in honor of President Theodore Roosevelt, a profound believer in the power of sports who considered Oyster Bay his favorite home and who overcame a number of physical ailments himself as a child.
LI Sled Hockey is 100% volunteer run, from the President ,Frank Martin, who effectively works full time for the organization, to Head Coach Phil Derenze, to everyone who provides supportive services to the players on the ice. While Frank is “retired” many of the board members and older volunteers are also working and raising families. A lot of the younger volunteers are high school or college students that also play stand up hockey. They’re busy during the week!

“We are ALWAYS looking for volunteers,” says Frank, “Especially on Tuesdays!”

He notes that while some of the students come because they care, others do it because it looks good on a college application. For these volunteers, the experience is often transformative. They begin to see people differently, including themselves. They learn there are ways to help and that once they gain courage and confidence in offering it, it can feel really good to do so.
Frank wants to make sure Kevin is properly recognized as well. “He’s such a kind man with such a gentle heart. I met him through Bryan, both of them being veterans. Now, he’s part of the Rough Rider family and I don’t know what we’d do without him!
“I don’t think Kevin realizes the importance of what he’s doing, but he plays a vital role. If I had more people like Kevin in the program – practices would go a lot more smoothly.”

Never say “No” to a Challenge

While there are now many teams in the US, LI Sled Hockey is special. Committed to never turning anyone away, the team now ranges in age from 11 to over 65 years old. Additionally, Frank explains, “We are one of only two teams that includes individuals with both mental and physical challenges.”

It’s quite a thing to coach as the players have such different abilities. Some need things explained over and over. Others have very different requirements.

There are players with spinal bifida, and players with Down syndrome. Some have defibrillators. Some can’t hear. Others are missing limbs. Some were born this way, others suffered terrible accidents. The list goes on and on, including veterans who may have been physically disabled or who suffer PTSD.

“We have nine veterans on the team now,” Frank explains. “We turn no one away, and no one pays for anything. Equipment, travel, hotel rooms. None of it.

This is substantial. Hockey is not a cheap sport to begin with. In this case, it requires custom sleds to match each individual’s special needs. Equipment alone costs over $2000 per player. Their annual budget approaches half a million dollars.

Fortunately, Frank’s motto is “Never say ‘no’ to a challenge.”

“It takes a lot of fundraising to make it happen. I wake up every day and keep plugging along. I’ve been doing this for 25 years. 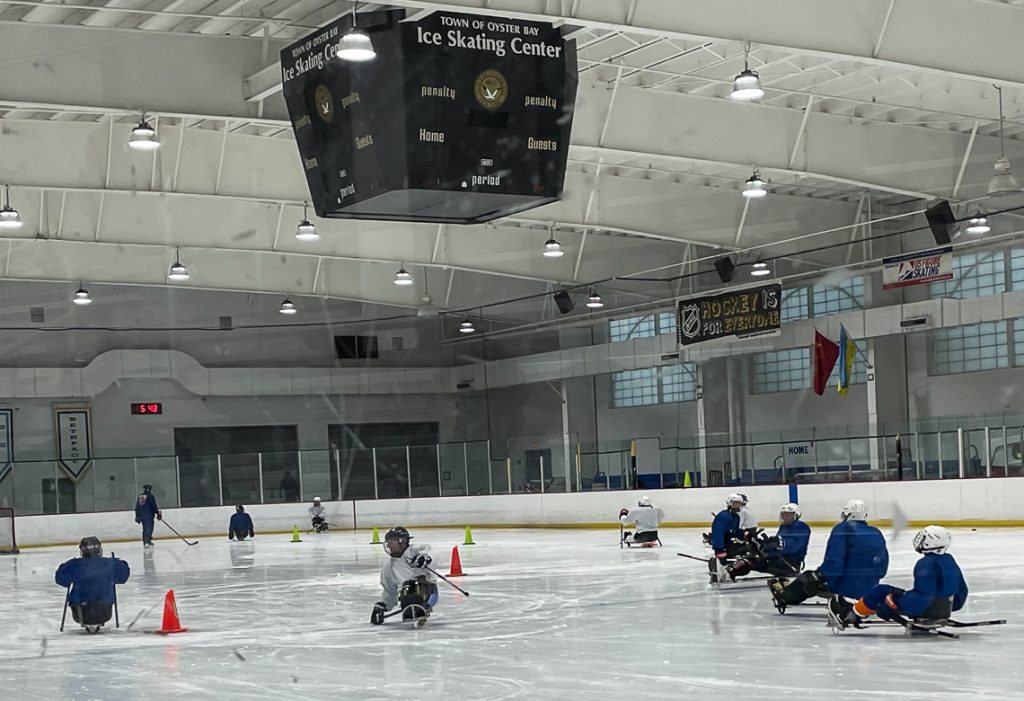 When I first met him, Kevin was excited to tell me about a 24-hour “Hockey Helps Marathon.”

The mission of Hockey Helps is “to help individuals struggling with addiction, mental illness, and cancer, and to provide support for children and youth facing economic disadvantages, illness, or related hardships.” The Marathon features 24 hours of continuous hockey where teams are asked play against current and retired NHL players to raise money for local organizations. To date, it’s raised over $4 million dollars.

Frank is clear, “We are NOT the main focus of this charity. We were simply invited in as participants, just knowing in the beginning that we were going to play two games.”

They were excited to show what they could do, and to be a part of the program. They were then delightfully surprised to receive a relatively small donation in advance of the event. Even more fortunate, their participation led them to meet Michael Dowling, CEO of Northwell Health.

“Since then,” says Frank, “Northwell has been a major supporter of our organization.”

They were excited to show what they could do, and to be a part of the program. They were then delightfully surprised to receive a relatively small donation in advance of the event. Even more fortunate, their participation led them to meet Michael Dowling, CEO of Northwell Health.

Grateful Thanks to "Heavy Hitters" and Faithful Friends

Later, Kevin tells me that he gave $1000 himself last year. “I was able to do it, and glad I could. It means a lot. Do you know how much just an hour of skate time costs?”

I have no idea.

“We’re very fortunate on Long Island to have some wonderful people,” says Frank, “Some of them have a lot of means. ‘Heavy Hitters,’ I call them. Folks that when they say they’re going to do something, they do it big.”

One is Michael Dowling. Others are folks who really don’t want to be recognized. On one of their very first road trips, one such angel paid their entire hotel bill. Another realized they were operating out of an old Dodge Caravan with the seats removed to accommodate equipment and generously presented them with a Dodge Sprinter.

“We use the van for all of our events and tournaments,” says Frank, “Road Trips” up to Canada, down to Florida, out to Chicago. “It has a lot of miles on it. Couldn’t have done that in our caravan, that’s for sure!”

He goes on, “These guys, they don’t want credit for any of this. They just want to help”

I ask about the graphics emblazoned on the side, including an image of the former President wearing a cowboy hat and a hockey uniform, riding through a lucky horseshoe astride a flaming steed.

“The logo was an afterthought,” he tells me, “that was donated separately.”

“The kids designed the logo,” he explains, “I call them all kids, but, really….they range in age now from 11 to 68. Still, they’re all kids when they get on the ice.”

We Measure Our Success In Smiles

I go into the rink to find Kevin McNeil standing on the sidelines watching with a smile on his face. He explains that he never got to Pennsylvania, as he’d told me he would a few weeks ago, and has found himself instead making a room for a needing friend who lost her lease.

“She’s having a rough time. I told her that if she could clean, I could keep a roof over her head. That’s what friends are for, right?” He goes on to talk a little about Island Harvest, how he loves delivering to the veterans and how today he worked a job fair the organization held, signing folks in. They had about 28 employers on hand seeking employees. He hoped it helped.

“Amazon’s paying like $26/hour,” he says. I briefly consider applying and then follow his eyes which have taken his attention back to the skating rink.

“Some of these guys are really good,” Kevin says, indicating a smaller player deftly slaloming the cones. “He’s a beast. He runs the place.” He then points out another player who ranks among the team leaders. “Others can’t really do that, but by the looks on their faces when they get on the ice you can see they’ve already won.”

“I love it,” he says, “Seeing these guys smile just makes my whole day.”

I get it. Seeing the smile on his face made mine.

If you would like to find out more about the LI Sled Hockey program, make a donation, volunteer or join the team, please contact Frank Martin directly at 631-848-3751.